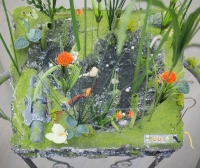 By Night With Torch and Spear

The exhibition takes its title from a Joseph Cornell film of the same name. It is a collage of workers in industrial settings, title cards made illegible and recontexualized from silent film, clips of vague historic and ethnographic fetishes, and oddly exposed images of insects. It is an extraction--a pulling from the dirt of American prosperity its primal liquids in order to turn them into strange fuel.

Extraction--a word which either brings to mind the processes by which organic matter is taken, to be then turned into chemical energy, or precision operations necessary for the recovery of key human assets--is a crucial tool of global order. Alchemy is a modern fact, and its products are worth many more sums than gold. Cornell's extraction is one that happens from a distance and with amusement, and as we watch the footage of molten metal being poured, moving abruptly from sepia to neon, we loose any sense of real documentation or purpose. A child, wrapped in comfort and looking on with wonder, does not stop to think if these workers are being properly paid. Processes are turned into fanciful toys, and work becomes alien. The insects in the film become comparatively engorged while their bodies still perform the functions of minuscule slaves, captivated in a delirium of entertainment. The motions are easy enough, and at this point, well rehearsed.

Cornell's films, like his boxes, are withdrawals to an inner court of fascination and pleasure. He takes the detritus of his civilisation and converts them into glimmering artefacts. The Qing dynasty, the last of an unbroken and ancient order, was both the apogee and nadir of China's Celestial Empire. As more and more wealth was created, and as the culture became more and more sophisticated--it's five thousand year old corpse covered in a mountain of jewels--its Imperial rulers retreated deeper and deeper into the microcosm that was the Forbidden city.  As contagion upon contagion coursed through it's bloated body, the practical government devolved into palace intrigue based more upon personal whim and the rituals of astrologers than any real desire for power. An extraction of the language and decoration of power from its actual body left its actors firmly convinced that only they had the honour of ruling over all of heaven even as their rotting flesh fell cleanly from their bones.

"Do not say that you were not warned in due time! Tremblingly obey and show no negligence! A special mandate!" [1]

The works in this show offer an alchemy of the debased, contemporary variety. In the gardens of Veit Laurent Kurz, notable for their ability to grow in both horizontal and vertical formats, we have a putrified and petrified landscaping. Fracking is done in reverse by a sick gardener, and where acids and gels pumped into the earth previously destroyed their surrounding environments, here they induce a fever of growth, sprouting beautiful plants from even artificial soils. Technological implements augment their power. The plants have learned to turn their old enemies into new slaves, overcoming and outdoing previous damage with a grim euphoria. The cost of these abominations to the surrounding air has not yet registered, but it is sure that once their veins touch the earth nothing else will grow.

Within the foliage, one encounters strange skeletons: sculptures by Renaud Jerez, the twisted and bandaged remains of a class of creative workers. They are decorated here and there in strange gear, which certainly used to have some purpose but now read mute. The archaeological record shows that these fossils were once a proud race, and enjoyed displays of luxury. Mummified after the fact, one wonders what strange disease afflicted their prone and misshapen bodies. Perhaps the bombastic images and alien glyphs that decorate these bodies were warning signs of rampant infection; scarlet letters telling horrified comrades what horrible crimes their once-friends had committed. Now bathed in an antiseptic chamber, they are safe to touch.

And finally, in a film by Stuart Middleton we witness a body tearing itself apart with agitated distraction; its masculine composure struck down by fierce pestilence. The drawings seethe with tensile lines, their outlines filled in sickly colours. Greys, yellows, purples and phlegmatic pinks and greens; the scenes represented step forward in a sweaty fever and stagger towards collapse. In animation, the forms are pulled by invisible strings; an accumulated dance of nervous tics producing the image of action, or an attempt to shake off something not immediately visible. The strong are rendered meek, and Earth learns to use her scars and grow back in force. The storms are her screams, and the floods her tears. The objects in this show are an isolated part in a long story of revenge; one that we can only watch with wonder as we are returned to dust by its unnerving speed.

Primitives are dancing in the light of a fire under the shadow of a factory, and their joy is the closest thing this author has seen to emancipation. At what point will we find the courage to dismantle the machines that tower over us and sell their parts for scrap?

————
1. Emperor Qianglong's letter to George III, in which he refuses a British offer of diplomatic relations and trade. Notable for its arrogance and rendered ironic by the century that would follow. (1792)