An archaeological excavation was undertaken on the current site of the University of Bedfordshire, Luton before its redevelopment. Records indicate that the area was the location of a castle built by Falk De Breauté, an Anglo-Norman knight and favourite of King John, sometime around the 1220s. A Medieval document shows that the castle was surrounded by a moat. De Breauté had dammed the nearby river for this purpose, however his actions caused serious flooding to crops and buildings belonging to the church, which led to complaints by local preachers and farmers.

De Breauté was one of the most powerful men in the kingdom at the time, so he was not overly worried by the complaints, and he allegedly said that he wished that the damage had been worse. He was often described as a greedy bully, and it is claimed that he died from a poisoned fish served by one of his many enemies. It is also said that the reason De Breauté rerouted the waters – a spring close to the city of Luton first documented around 200 BC (now the River Lea) – originated in the myth that the holy waters had physical and mental healing properties. In one respect, this was an attempt by De Breauté to gather the waters to strengthen his family. At the time, he was suffering from strong Obsessive-Compulsive Disorder – including symptoms such as constantly organising and measuring what was around him – and was looking for a cure.

On a quasi-compassionate level (one strangely alien to De Breauté) however, it is also said that the nobleman believed that the population of Luton weren’t able to deal with their surroundings in a natural way, and that, instead of following their instinctive desires, their behaviour was being affected negatively by society’s external rules, such as false moral codes associated with needing to preserve a role and purpose in the world, with spiritual work not being considered a purposeful activity.

In this respect, De Breauté’s ideas draw parallels against the contemporary phenomenon of a society manipulated and controlled by information technology, with vast amounts of data constantly bombarding individuals and communities on a daily basis, bringing with it a sublime form of psychological pressure. In his own words, De Breauté described members of Luton’s Medieval community, rather cynically, as: ‘a bunch of bad chillers who constantly need to DO something and who drag and involve people around them in their obsessive doings, DO, DO, DO.’

As a corrective to this historical and contemporary phenomenon, the Herba-4 Foundation is placing its resources into preserving the powers of local drinking waters in small international locations that contain holy springs and other sacred fluids. The Herba-4 Foundation wishes to remind Luton – a small post-industrial conurbation recently christened ‘a Town at the end of humanity’ – that it is built on historical waters of love, peace and wisdom, which, given the correct treatment, can lead to positive psychological, spiritual and cultural change. Through scientific and metaphysical research, it is the foundation’s goal to generate models, proposals and actions that make holy waters accessible again. 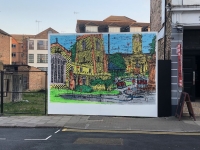 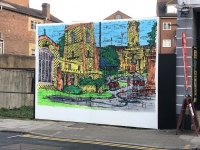