“Industrial civilization today, in any country of the world, gives credence to trained, degree-holding scientists and never to artists. The reasons are socio-political.
— Peter Fend

Deep below
a volcano is burning
The insects are dying the birds fall from the sky
I am not sure who I am talking to maybe it is only to myself
A whisper in discomfort
since this is new territory
I became tired of myself and the space I created
A space created between reality and fiction.
Inventions of my fearful mind that try to kidnap myself into absurdity
An escape from the idea that radioactive particles contaminate drinking water and the potential of getting an infection on a public toilet seat
I think of romantic painters and their pain with the world

Deep below
a volcano is burning
I passed trough the ruins of Pompeii The burning oil fields of Odessa, the streets of Marfa,
The jungles of Hawaii
By the modernist bungalows of LA and Berlin
I collected materials and memories, met people and animals
Thought of architects, engineers, musicians and poets
I used more styrofoam, plastic and paint than needed
To materlize
Invented creatures, stories, materials, histories and products
fictive roles in fictive narratives
As an artist, i feel like a fictive person in a fictive world
I think of the footstep I left in this world
Cultural and ecological
And my urge to spin new stories

Deep below
a volcano is burning
Dragged between joy and appreciation, doubt and responsibility
I Enjoy the view through glass windows of those bungalows i passed
A view that became a metaphor
of a delusional relationship between human and nature
A false gate
Between and Luxury and the most basic needs
Vesuvius and the Kilauea, volcanos of big size, came over its citizens as a surprise The Pompeiian citizens as well as the Hawaiian
Those Blurred minds of that time, could not see it come
Occupied with building a modern civilisation, a high culture Focused on Language, art, books, technology, canalisation and entertainment
The burning oil fields where machine pump back gold
I think about how technology and scientific involvements of this time Could technologic win this unlinear battle

Hope, Salvation Optimism vs. Pessimism Technology vs. Restriction
Hope for the shamans of silicon valley The return a time when impressions of nature had an overwhelming, transcendental and sublime like effect
I see the rain on leaves, the waves crash on the rocks
I am an enchanted by nature
The insects are dying
The most important wheel of the watch I am the reason for it 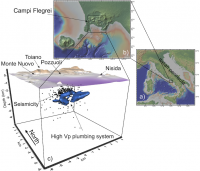 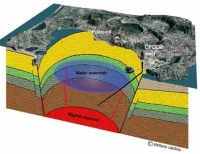