In previous decades the human quest for knowledge and identity is witness to a strong reliving and retelling of shamanic techniques as well as a resurrection of early-christian and pagan traditions.
The tendency of this revival movement is to reform ancient religious and belief systems through a re-living of the idea of the irrational and even magical. This reflects a general desire to arrive at meaning channeled through spirituality. A parallel thread in this revival touches on a re-tracing to the technologic as well as scientific developments of our time and through out time as a force governing our physical and spiritual needs.
As a new Spiritual Space, virtual reality displays a secular version of the medieval concept of heaven, a space which goes beyond the sensual experience of the human and displays a transcendent or sublime like experience. An experience which was once connected to a time when the impressions of nature had a overwhelming effect to the human, an effect that created wide space for the belief of the irrational, magical and supernatural and by this formed the ancient idea of heaven.
The virtual space that has its biggest access in the commercial sector through movies and computer games that are often linked to the fantasy and science fiction genre often imitate the ideas of magic and the supernatural. Special effects have the ability to create a techno-sublime, enchanting experience and catalyze the enchanting effects of the images.
The circumstance of an industry which steadily refers to scenarios of bygone eras like the medieval times, iron age or renaissance by mixing up symbols and signs of those ancient cultures, samples ancient signifiers into a new language within a most modern framework.
This fusion and fetishism of the „old“ within the „new“ creates a subcultural landscape which displays ritual like behaviors, new cults and a belief in magic which seems to be a natural part these practices. The enchantment through virtual environments can be found within role game cultures, cosplay, new forms of cyberpunk as well as in the neo medieval movements or new ways of Wicca, all those produce phenomenas like Technowizards, Technowitches or Cybershamans.
Independent from the fantastic worlds of the entertainment industry and with a more general idea about technologic inventions e.g the internet or the virtual space itself, vast, layered and by this not mentally accessible structures, step out paganistic concepts like the one of Technopaganism and Technoshamanism. Forms that describe how technologic and scientific involvements of our modern time can also lead to serious reconstructive ideas of old beliefs and religions and a new sensitivity towards nature. Those Living concepts show us how mystical as well spiritual characteristics can be rooted in technology.

The extrem situations between the rational/technological and the virtual/emotional, the Fusion of the old techniques with the most modern as well as a mystification through a virtual created, ancient and heaven like space, leads to new extremes. The virtual world become a new sanctuary in the same way the human once found a Spiritual space in nature but also functions as a hideout and an undetectable space for gatherings of others extremes and their rituals. 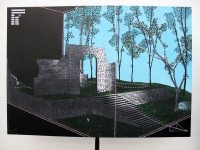